While some of our elected officials are starting to respond to pressure and are showing just the tiniest hints that they are listening to our concerns, Assemblyman Al Graf deserves special recognition as someone who has understood the issues from the beginning. He recently posted the following on his Facebook page.

Parents, as well as teachers, are stepping up and speaking out. Over the last five months people have been rallying each other, bringing others into the groups, created websites and spending their own money to educate others by holding forums. I have never seen anything like this. The entire state is coming together and demanding that the state stop this abusive program. We have had 18,500 people sign onto a letter to the Governor, however we are a state with millions of people.


Everyone that has joined this movement understood that it was an uphill battle, and that it was not going to happen overnight, In the beginning the press, the Governor, the Senate and certain members of the Assembly thought if they ignored you, you would go away. How is that working out for them? There are however, people out there that have no idea what we are talking about, there are people that call me to give me the sound bites offered by the supporters of this garbage. I had a retired teacher call me and tell me she was upset with me that I wanted to withdraw from common core and race to the top. She told me our students were falling behind china, that our teachers were complaining because they had to do more work. That our children could not read or do math when they entered college. That we were falling behind other countries. that we would have to pay back the seven hundred million dollars that the federal gave us for this program. That NYSUT negotiated the APPR standards with the state so teachers should stop complaining. Are you getting mad yet?
I asked this retired teacher if she had looked at the ELA’s in engageny? She had not. I asked her if she has had any experience with the material that was rolled out? She had not. I asked her if she knew how and when this program had been rolled out? She said she did not.
She also told me she had written a letter to Newsday supporting common core. I asked her if you have no practical experience with the curriculum as a professional teacher who has sense retired how do you feel you can offer an educated opinion on the topic. She said she knew common core was a good program. I explained to her that we did not get seven hundred million dollars and that we only got five hundred million, and that if we pulled out we would merely forfeit the two hundred million remaining, but it was estimated that this is costing us over a billion dollars to implement. She did not want to hear it. I told her the teachers were excluded from writing the common core standards and curriculum, she disagreed. I explained to her that the curriculum did not take in consideration children with disabilities, ESL students, children from economically distressed families, advanced students, and students that work harder than anyone else to maintain an B or C, she did not believe it. That the material given to teachers were a script and did not allow teachers to practice their craft, she said they can write their own curriculum. What the conversation came down to was in her opinion as a retired teacher, our teachers, and children were lazy and we had to put in common core, and the standards were what was needed so our children could compete in the world and be able to succeed in college. That by me speaking against this program I was harming our children. I told her I was sorry but, I am committed to taking back our schools and we can agree to disagree, that I understand that her mind is made up and she did not want to be confused by the facts.
The reason why I am telling you this is we have a lot of work to do. This is a retired teacher who is spewing this uneducated nonsense and offering an opinion on something she has had no experience with. She has not seen or experienced the program yet she is out in public expressing her uneducated support for the program. Whether you are a parent, a grandparent, a teacher, or an administrator, or a school board member, you are and educator who is charged with going out and bringing people into this struggle to regain our schools and stop the state sponsored child abuse of our students. Get them on the petition, the phone with their representative, get them to email fax, or drop a letter off to their office, form a group and ask for an appointment with your senator or your assembly person if they are not on the bill. tell that representative how this is affecting your child, your home, your school, your classroom, copy the inappropriate handouts the children are given, write the grade your child is in send them to your representative or drop them off in their office, or bring them to your appointment. Show these assignments to other people. Educate, recruit, engage, get others to engage. We are in this for the long run. I need your help. Without your help this abuse will continue and become the new normal leaving many children behind

How Tuesday night’s forum was reported in the media:

A few pictures from Tuesday night (as well as a couple from the Ward Melville forum).

Three representatives from SWR spoke at Tuesday night’s Common Core Fourm. To here the questions/comments they posed to Commissioner King, click the links below.

You can also listen to the response that Commissioner King gave to all of the speakers. 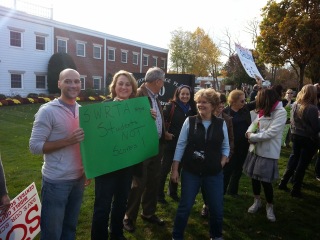 Close to 1,000 teachers and parents from SWR and other area districts showed up at Sen. Flanagan’s office yesterday to express our displeasure at how he’s been doing his job as chair of the Senate Education committee.
For more pictures, SWRTA photo album, or  click here for more pictures from the PJSTA website. 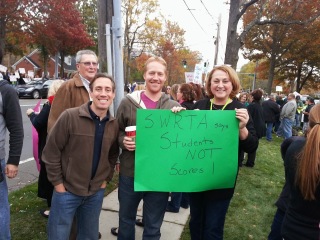