A few updates on the departure of John King from NYSED:

There were no surprises in the reactions to the announcement that King would be leaving.

In case you’re wondering exactly what John King’s responsibilities will include at the USDOE, here’s a picture from the near future (courtesy of Lace to the Top). 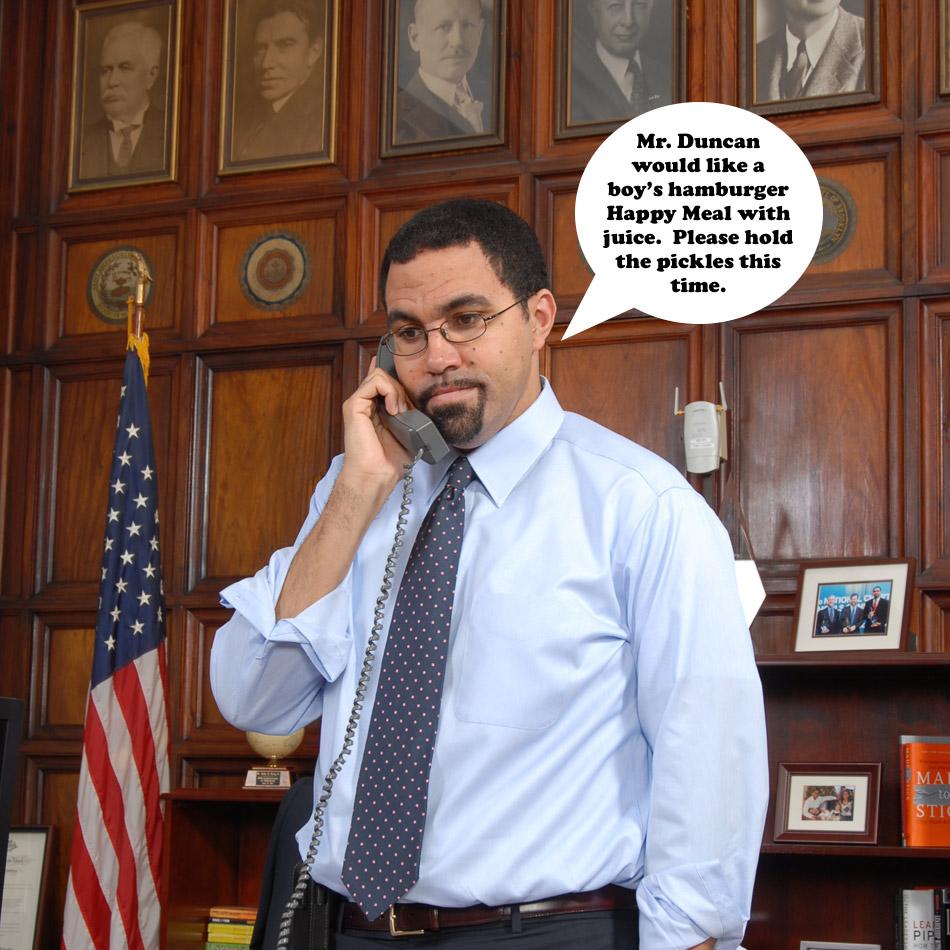 The other day we posted a satirical article about field testing, and then there was this, which brings to mind a piece in the Washington Post claiming that satire is dead.

“The art of satire consists of heightening the ridiculous part of something true until everyone can see how absurd it is. But when something is already as heightened as it can get, what can you do?”

They made a good point. After all, how can we try to highlight the ridiculousness of the Pearson Corporation when their website features a Common Core gift guide?!

And how can we mock the arrogance and pretentiousness of our Governor when… well, you’ve got see this to believe it.

(Shout out to Chris Cerrone, who blogs at http://www.nystoptesting.com/ and http://atthechalkface.com/author/nystoptesting/ for the links to the King article and the priceless Pearson page)

State To Dramatically Increase Field Testingby Trevor Krebbec, staff reporter, Education Weak
Based on what he called, “the tremendous popularity of our current field testing program,” New York State Commissioner of Education John King announced plans to make these tests a weekly occurrence throughout New York State public schools next year.“Many of our vendors felt it was unfair that only Pearson is able to test their products in the school setting. We recognized this as a valid complaint, and because equity is one of our top priorities, we came up with a plan that we think will better serve all the members of this important constituency”Texas based Paragonic, Inc., a manufacturer of school furniture, will be the first participant. On the first Friday of the 2015/16 school year, all public school students in the state will spend 90 minutes testing Paragonic’s new line of chairs, sitting down and standing up again repeatedly to evaluate the comfort, weight, and ease of movement of the chairs. Stressing how much NYSED (the New York State Education Department) cares about special ed students, Commissioner King added that students with test modifications will be given extra time, up to 3 hours of sitting down and standing up. Parent groups have already announced plans to opt-out of these added field tests, but Commissioner King was adamant. “Why would you deny your child the opportunity to be involved in their choice of seating? I think it shows that parents who will allow their children to stand and stare for 90 minutes while other students at least get to sit down for part of the time… well, I guess they just don’t care about their kids.” Teacher representatives disputed King’s claim that field tests are popular, but King stood his ground. “Some are claiming that we only spoke to executives at Pearson, but this is completely untrue. We spoke to middle managers, sales reps, people in accounting, and even administrative assistants. None of them oppose field testing. If anything, most felt we weren’t doing enough.” Responding to further complaints that NYSED’s actions run counter to the opinions of educators, King said, “we conducted a survey of every superintendent who has applied for a position at NYSED, and they were 100% in favor of our plans for testing – not to mention the Common Core, APPR, literally everything.”Deputy Education Commissioner Ken Wagner acknowledged that there have been complaints, but he dismisses them, saying these people “have constantly criticized nearly everything the department has done in the last four years.” In other words, as King explained,  “We are very open to feedback, but it is NYSED policy not to accept complaints from people who complain. We want to hear from positive people, not naysayers. To put it another way, we know we’re right, so anybody who says otherwise is, by definition, wrong.”Opponents of field testing may think they are looking out for the best interests of children, protecting them from unnecessary stress and having their instructional time needlessly wasted, but Wagner says these critics are just lazy and ignorant. “Rather than go through the difficult work, taking the time, to help people understand the need for field testing, sometimes it’s easier to say ‘I’m opting out.'”After the chair test, subsequent field tests include Johnson & Johnson’s “Band Aid” brand (all students will have different size bandages applied and ripped off their skin to test “ouchiness”), Elmer’s glue (younger students will eat different types of paste to test for toxicity) and Epi-Pen (a single use needle used for treating severe allergic reactions).  Previously, Epi-Pens had only been used on students who were experiencing symptoms of reactions. But according to King, this is just too small of a sample. “This is really about what’s best for all kids, and the only way we can know if these needles hurt too much – or not enough – whatever the case may be, is by testing them out on every single student.” Some districts have indicated that they will refuse to participate, but Mr. Wagner says that’s not acceptable. “If a particular community does not participate in field testing, it’s not like the need for field testing suddenly goes away. The burden just gets shifted to their neighbors.”
Public school advocates disagree, suggesting that, ideally, all districts would refuse. However, the commissioner counters, this would be even worse, as the burden would then be pushed onto corporations. “Corporations exist to make a profit. It’s that simple. If we don’t allow them to test out their products on our students, it will cut into their bottom line, and that hardly seems fair.”
New York Board of Regents Chancellor Merryl Tisch agreed.  “As John has said, it’s all about equity. Corporate profits in this country are at an all time high and yet some firms are seeing margins that are barely out of the single digits. Have you ever been in the boardroom of a corporation that failed to meet its quarterly projections? Well I have, and its a sad, sad, sight –  one that I’d like never to see again.”“Some point out that our mission is to serve students, but students are people and so are corporations. And while students are only with us for 12 years or so, corporations can last forever and we have to take that into account.”
Asked if this new policy contradicts his prior statements regarding the need to limit testing, the Commissioner insisted it did not. “Field testing isn’t testing. When you put a modifier in front of a word, it becomes a new thing. We can do even more. Some of our corporate friends have suggested “pre-field-testing,” “quasi-field testing,” even “enhanced field testing techniques,” really creative stuff. You can see why we’re so interested in allowing corporations full access to our public schools. As I see it there are still over a hundred days on which students aren’t taking tests. This is only the beginning,” Mr. King said. “Only the beginning.”

A few recent stories from the education blogs and columns:

Harvard Law Professor and self proclaimed “thorn in Governor Cuomo’s side,” along with several pro-education organizations, is leading a fight to protect public schools from starvation and corporate takeover.

As previously mentioned, the Board of Regents is looking to make participation in field tests mandatory. The window for public comment is now open, so please make your voice heard by clicking here to send a message to the Governor, the Regents, NYSED, and our elected officials.

The level of public education / teacher bashing that goes on in the general media makes one wonder if there is a new category of Pulitzer Prize dedicated to the most hysterical, outlandish, and misleading attack on educators. Against this landscape it is nice to see the occasional article that bucks the trend. What makes the three links below notable is not that they are pro-teacher per se, but rather that they stick to actual facts in their reporting. You know, like actual journalism.This piece from Forbes.com tears apart the notion that we can fire our way to greatness in education.This article, from U.S. News, throws some cold water on reports of education “miracles.”And from The Atlantic, an article that pointing out that Education isn’t the problem, inequality is.

As part of his promise to break the monopoly of public education, Governor Cuomo is looking into raising the existing cap on Charter schools in New York.  As you might expect, there is opposition to this idea.

With this in mind, here are a few stories / links on just what’s wrong with the unfettered growth of charter schools.