John King Confirmed
The Senate confirmed John King as Education Secretary yesterday by a vote of 49 to 40 (eleven Senators did not vote, including Cruz, Rubio, and Sanders).

Many SWRTA members, along with thousands of other teachers and parents across the state, had written to our Senators, imploring them to reject King. We are happy to report that Kirsten Gillibrand voted with her constituents and her conscience rather than her party – she was the only Democrat who voted against the nomination. This is actually a hard thing for politicians to do, so why not take a minute and reach out to Senator Gillibrand and thank her for doing the right thing?

Unfortunately, our other Senator, Chuck Schumer, took a slightly different approach, putting politics ahead of children, and turning a blind eye to what went on his state as he voted in favor of rewarding King for his arrogance, incompetence, and destructiveness. Feel free to let him know we don’t look kindly on his vote and are sick and tired of Democrats betraying public schools and taking our support for granted. 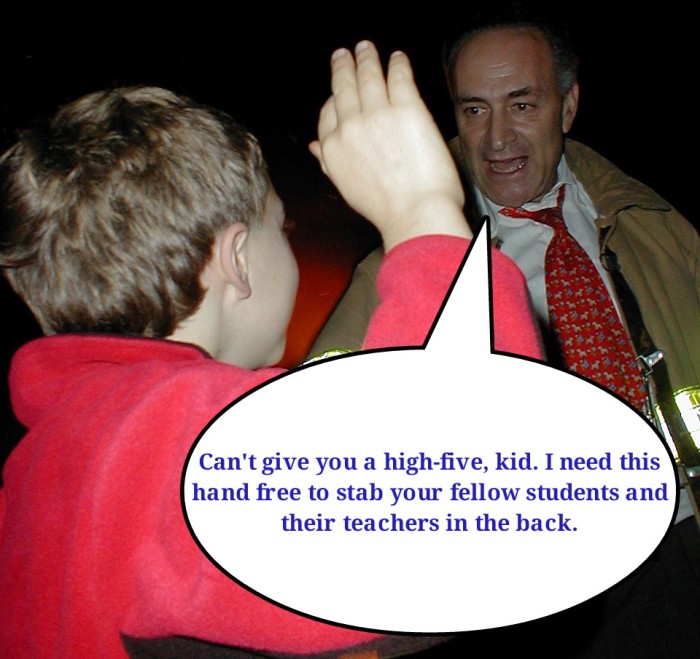 A Silver Lining?
A few weeks ago, teacher/blogger Peter Greene wrote about why he was hoping that King would get confirmed. And while sarcasm and snark make more than occasional appearances in his writing (his blog is called Curmudgucation), he makes a great point. It’s conceivable that King is more likely to hurt, rather than help, the reform movement:

“…in New York, John King did what dozens of pro-public ed activists failed to do– he got thousands upon thousands of parents and taxpayers to see just how crappy the reformster plan for education was… I’m just hoping that King can do for the nation what he did for New York. Spread opt out across the country. Galvanize parents. Tout reformster ideas with so little sense or restraint that even the most casual observers will start to think, ‘Hey, those seem like really bad policies.'”

Changes in the Regents
Last week, the Legislature voted to fill the three vacancies on the Board of Regents. While there were some great candidates who did not make the cut (such as Marla Kilfoyle), this is still great news. The new Regents are “Elizabeth Smith Hakanson, a retired teacher … Nan Eileen Mead, a parent who has two students in public school [and] Luis Reyes, originally from Puerto Rico, who has championed bilingual education and was endorsed by leaders of the test-refusal movement.”

As Chalkbeat reports, “The Regents have gained seven new members in the last two years, and are set to elect a new leader in March — changes that are likely to shift the dynamics and policy direction of the board, which makes decisions about K-12 and higher education in New York state.”

Since the Education Transformation Act is still in place, there is only so much that the Regents can do, but it is still great to know that the pro-public education mindset is now in the majority. This is especially important since one of NYSUT’s main lobbying points is that the Legislature should be taking direction from the Regents in crafting or changing education legislation.

For the first time in a while, we have valid reason for some optimism.